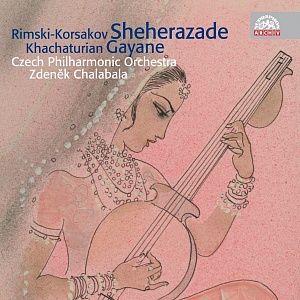 Owing in large part to their exotic inspiration, Rimsky-Korsakov's Sheherazade and Aram Khachaturian's Gayane are among the most beautiful and most frequently performed Russian and Soviet works of music. The creator of Sheherazade, who as a young navy officer travelled the oceans, was enchanted by the Oriental collection of stories and folk tales The One Thousand and One Nights. Yet Rimsky-Korsakov's colourful instrumentation also gave lustre to another work, Mussorgsky's fantasia Night on Bald Mountain, with its dramatic depiction of a wild Sabbath of witches. Khachaturian's ballet suite Gayane includes Armenian folk melodies, which were the composer's most powerful inspiration and undoubtedly helped to earn the piece global popularity (the celebrated Sabre Dance is one of the most frequently played compositions worldwide). The recordings of all three works were made between 1953 and 1955, the paramount period of Zdeněk Chalabala, the chief conductor of Prague's National Theatre Opera at the time. The great imagination with which he tells stories, combined with the inimitable timbre of the Czech Philharmonic Orchestra, makes these recordings truly remarkable. Yet another treasure appearing on CD for the first time…

Sheherazade - immortal stories with the scent of Orient in the vivid colours of Chalabala's recording.

”Chalabala's gre­atest claim to fame was as an opera conductor…and if asked to name his principal quality in purely orchestral music it would be that same theatrical flair…All the recordings have been well transferred and, provided you're not monophobic, this exciting double-pack should earn itself a favoured place in your collection, certainly for this repertory.”
Gramophone, Awards Issue 2012