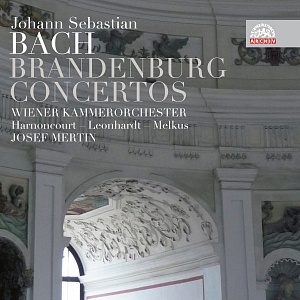 Within a short time, early music enthusiasts had to say their farewells to two personalities who, for half a century, influenced the development of what we call the authentic interpretation of early music: Gustav Leonhardt and Nicolaus Harnoncourt. In 1950 Supraphon made a complete recording of Bach's Brandenburg Concertos performed by a chamber ensemble led by a musician of Czech origin, Josef Mertin (1904-1998). A scholar and organ builder as well, he relentlessly "dusted" the works of composers from the previous centuries (including Guillaume de Machaut), stubbornly seeking the way to give their music its authentic sound. The names of his pupils who took up his legacy make an impressive list that includes Claudio Abbado, Mariss Jansons and Zubin Mehta. Mertin has managed to win a number of students for the interpretation of early music on period instruments, among them musicians without whom we can hardly imagine the field nowadays. The Brandenburg Concertos were performed by an ensemble whose members were the 22-year-old cembalist Gustav Leonhardt (playing the solo in Concerto No. 5), a rising violin star Eduard Melkus and a year younger violoncellist Nicolaus Harnoncourt. It was the first time that a chamber size of the ensemble and period instruments were used. Hopefully, listening to the recording will convince you that it is more than just a historical document. As far as Mertin and Harnoncourt are concerned, this unique recording is also a proud reminder of their Czech roots.