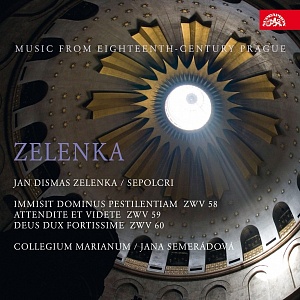 Jan Dismas Zelenka, the most distinctive figure of Czech Baroque music, no longer requires any introduction. His Prague works, however, have yet to be paid much attention. And unjustly so. The three sepolcri (cantatas intended for performance on Good Friday at the Holy Sepulchre) represent the earliest music of Zelenka's that has been preserved, yet they are already truly singular pieces encompassing all the traits of their creator's remarkable compositional style. Zelenka created the pieces for Prague's Klementinum, the oldest Jesuit college in Bohemia, and in a unique manner they serve to document the copious music performances that took place at the Saint Salvator Church, one of the most significant places on the "music map" of Baroque Prague. In 1709, Zelenka conducted at this church the performance of the first sepolcro. Three centuries later, the cantatas were recorded for the very first time (at the church located at the opposite end of the Charles Bridge) by Collegium Marianum, one of the finest Czech and European Baroque ensembles, together with four outstanding soloists. Another instalment in the successful Music from Eighteenth-Century Prague series, and another chapter of Jan Dismas Zelenka's remarkable oeuvre presented to the listener.

Zelenka's Easter cantatas come back to life after three centuries.

”Credit is due to Jana Semeradova for a world-premiere recording, and for the cool professionalism with which he and his choir illuminate the score's structure. What fails to come through is the verve with which the composer appealed to his Jesuit constituents…The artistry of Zelenka, rather than the performers, is what makes this disc a worthwhile acquisition.”
BBC Music Magazine, June 2012

”Though the more consistent balance of later works is yet to be achieved, his many admirers will surely be delighted at the opportunity to acquaint themselves with this younger but clearly recognisable and lovable version of their hero. Collegium Marianum introduce us to him in performances that are skilful, stylish and attractive to the ear…A beautiful, warming Baroque discovery.”
Gramophone, April 2012

”They are the earliest pieces by Zelenka to have survived…The long, achingly expressive melodic lines that are so characteristic of Zelenka's later instrumental writing can be heard in the vocal writing here, along with his fondness for constructing elaborate fugues, and for coming up with totally unexpected dramatic twists. They are fascinating rediscoveries.”
The Guardian, 15th December 2011

”The tone, unsurprisingly, is restrained, yet there is an underlying sprightliness and restless invention, well captured by the Prague forces.”
The Daily Telegraph, 13th January 2012