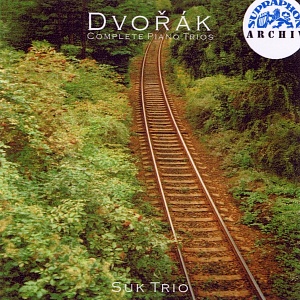 amazon.com
amazon.de
amazon.co.uk
amazon.fr
amazon.it
amazon.es
amazon.ca
Catalogue Number: SU 3545-2
Published: 19th March 2001
Genre: Chamber Music
Format: 2 CD
One of the best-loved combinations for home music-making and the concert platform alike during the lifetime of Antonín Dvořák (1841 - 1904), the piano trio has retained its popularity to this day. No wonder then if Supraphon's ARCHIVE series has now turned to none other than Dvořák who tried his luck in this format with remarkable success. His four compositions for the combinationof piano, violin and cello, are all masterpieces which have remained stable parts of the concert repertoire. Moreover, the second pair of the four works (Trio in F minor; Dumka) have held aparticularly privileged "superstar" status in the international chamber music literature.
The interpreters here are the Suk Trio, formed in 1951 at the behest of then student of Prague's Academy of Music, the violinist Josef Suk (b. 1929), grandson of the composer of the same name and great-grandson of Antonín Dvořák. The ensemble's triumphant artistic trajectory spanned nearly four decades, filled with appearances on Czech and international concert platforms, making its most valuable recordings with the membership of Josef Suk, Jan Panenka (1922 - 1999) and Josef Chuchro (b. 1931).