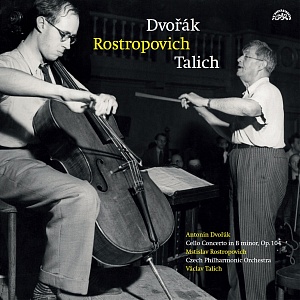 Dvořák: Cello Concerto in B minor

Three legends: Dvořák - Talich - Rostropovich. No wonder then that their "encounter" gave rise to another legend: Rostropovich's feted recording of Dvořák's cello concerto. It was made in 1952, two weeks after the 25-year-old cellist and darling of the Prague audience had performed the work with the Czech Philharmonic conducted by Karel Ančerl at Prague Spring. Talich was still banned by the Communists from giving public appearances in Bohemia, yet he was still allowed to record.
As Rostropovich himself declared, his interpretation was strongly influenced by Talich's take on the piece - and with it also Dvořák's direct legacy. The soloist pointed out the recording's exceptionality: "Some time after the disc was released, I was phoned by my friend Sviatoslav Richter, who said that he had just heard the recording made with Václav Talich and found it a work of genius! He was enthused. I consider this recording of Dvořák's cello concerto the best I have ever made. And even though later on I recorded the concerto another seven times, it is the one that means the most to me. Throughout my life I have remained faithful to that which Václav Talich taught me." Supraphon has returned to the most celebrated recording of the most frequently performed cello concerto and its release, directly mastered in pure analogue, is a very special treat for lovers of the warm, rich vinyl sound. A delicacy for true connoisseurs!