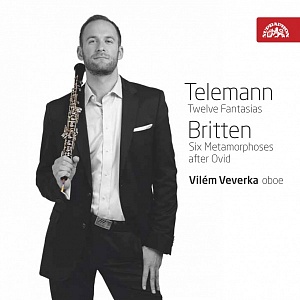 How many timbres, shades and characters can a melodic instrument express? The repertoire for solo oboe is sparse, yet oboists can boast of a true gem: the inspiration brought to Benjamin Britten by the oboe and the verse of the Roman poet Ovid gave rise to the cycle Six Metamorphoses. In six personifications (Pan, Phaeton, Niobe, Bacchus, Narcissus, Arethusa), the impeccably refined miniatures represent contradictory human features. A similar abundance of characters is also rendered by the collection of Twelve Fantasias by G. P. Telemann, one of the most productive composers of all time. This unique cycle was originally intended for the transverse flute, yet its being played by the oboe is fully in keeping with the Baroque performance practice, affording the soloist the opportunity to display to the full the instrument's virtuosity, as well as the wide colour scale and expressive abilities. A repertoire spanning the period between Baroque and contemporary music is one of the most salient features of the recording's protagonist, Vilém Veverka, the winner of a number of international competitions and an acclaimed soloist. The 70 minutes simply fly by when listening to a solitary oboe in the hands of an artist of such distinction.

All the beauty, colourfulness and diversity expressed by a solo oboe...