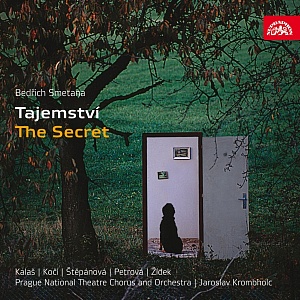 The latest release in the Czech Opera Treasures cycle is Smetana's The Secret, as explored and conducted by Jaroslav Krombholc in 1953.
Eliška Krásnohorká prepared for Bedřich Smetana a libretto based on her story set in the present day in the region beneath the Bezděz peak. She underlined the plot with detailed drawing of characters, depicting in turn pig-headedness and emotionality, mulishness and loquaciousness, wit and caginess, devoutness and superstition, yearning for love and lucre alike. Smetana found in the gamut of observations of the national character the opportunity for a thorough compositional elaboration. The main musical theme, akin to the world of the symphonic poem From Bohemian Fields and Groves, served to render both the presage of a mystery and a dance trifle. Yet Smetana also applied the real sound of flails, imitation of the nightingale's song, stylisation of a broadside ballad and folk song, set to music a procession as well as a dance of sprites in a dream, composed a fugue and large ensembles, and after he had accorded at least one independent song to each main and minor character asked for verses for another extensive scene of the baritone hero. And in all aspects the final result was a true operatic gem.
The re-edition of this recording is part of the Czech Opera Treasures cycle, whichwill gradually bring forth other recordings of complete operas previously unreleased on CD.
The first digitally remastered CD of Bedřich Smetana's opera The Secret, as explored and conductedby Jaroslav Krombholec.