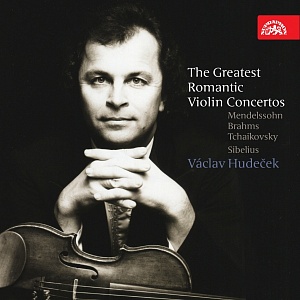 Václav Hudeček ranks among the most gifted violinists, not only on a Czech but also an international scale, to have graced a 20th-century concert stage. Following his debut in London (at thetender age of 15!) with the Royal Philharmonic Orchestra, he appeared at the most prestigious concert venues (Carnegie Hall, Suntory Hall, Osaka Festival Hall, Sydney Opera) with world-renowned orchestras (Berliner Philharmoniker, Cleveland Symphony Orchestra, NHK Philharmonic Orchestra, Gewandhaus Leipzig, etc.). David Oistrakh, who immediately recognised Hudeček's exceptional talent, was his teacher and mentor, and on several albums accompanied him as a conductor too. Hudeček made the recordings of the four greatest Romantic violin concertos for Supraphon (between the ages of 22 and 28) with Jiří Bělohlávek and Václav Smetáček. They bear witness to the remarkable musicality and technical skill of the Czech representative of the Russian violin school and many years later have lost none of their power and should occupy a place in the collections of all lovers of the violin's passionate tone.
The four most beautiful Romantic concertos rendered in the rich timbres of Václav Hudeček's violin

“In the Canzonetta of the Tchaikovsky, Hudeček's playing is vividly expressive, with a sense of freedom in followingthe fluctuating emotional moods.“
Gramophone, September 2011