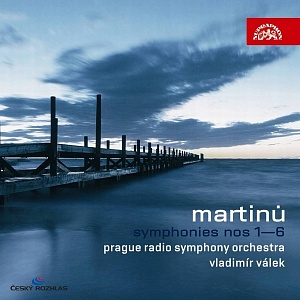 Spotify
Catalogue Number: SU 3940-2
Published: 22nd February 2008
Genre: Symphony
Format: 3 CD
This album has received following awards:
The sextuplet of Martinů symphonies originated within a very short time frame (Symphonies Nos. 1-5 within a mere five years - from 1942 to 1946 in the USA; Symphony No. 6, designated Fantaisies symphoniques, was completed in 1953) at a time when the composer enjoyed general acclaim and was bursting with creative energy. It was as if only on a new continent, where he was driven by war and was warmly welcomed, could Martinů muster up the courage to plunge into this classical form and seek to catch up on what he had "missed out on" until then. Followingin the footsteps of a number of leading Czech conductors, the demanding task was this time undertaken by the seasoned Vladimír Válek with the Czech Radio Symphony Orchestra. The complete recording was made in 2006-2007 at Czech Radio and reflects the high artistic level of this internationally renowned ensemble. Following the well-received Dvořák and Tchaikovsky symphonies, it is the third symphony set of the Czech Radio Symphony Orchestra released by Supraphon.