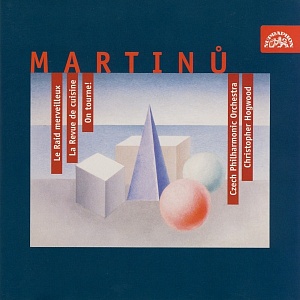 Spotify
Catalogue Number: SU 3749-2
Published: 29th April 2004
Genre: Orchestral
Format: 1 CD
Like the majority of major composers, Bohuslav Martinů (1890 - 1959) did not resist the temptation, in his case in the second half of the 1920s, to respond in his own musical output to the then immensely fashionable wave of jazz inspirations which took Europe literally by storm, a flood from which music audiences have not ceased to this day to draw more than a few utterly enjoyable listening experiences. Though on the whole this was a rather less than momentous period in Martinů's life and career, a stage which can be determined with comparative precision to havelasted from 1926 - 1930, its artistic harvest does still attract attention by its bizarre character, as well as by the evident boldness of its idiom. There, the coupling of jazz with various neoclassical formulas marked in a highly original way most notably Martinů's early opera and ballet music. In that sense, Kitchen Revue, On tourne! and The Marvellous Flight, are all works which stand apart, in terms of styl, from the main stream of Martinů's music. In them, the composer invested in his scores a profusion of hyperbolic devices, caricatures, as well as a cornucopia of piquant elements interspersed throughout their librettos and music scores alike. Hence also the resilience of these works, their ever titillating, thrilling, inspiring impact - in fact, in nolittle measure corresponding to the lifestyle of our own time. The challenge posed by the Martinů ballet suites was taken up here by distinguished British conductor and specialist in preclassical music Christopher Hogwood. For its part, the Czech Philharmonic seized this opportunity with exceptional zest: the combination of unusual repertoire and prominent guest conductor spurred the orchestra up to an impressive tour de force.

Martinů and the 1920s infatuation with jazz: the magic of spontaneous inspiration.