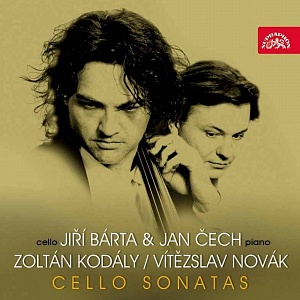 Spotify
Catalogue Number: SU 3515-2
Published: 18th August 2003
Genre: Chamber Music
Format: 1 CD
This album has received following awards:
Outstanding cellist Jiří Bárta is represented in the Supraphon catalogue by a thoroughly remarkable recording of J.S.Bach's suites for solo cello; a CD of cello concertos by Dmitry Shostakovich; a complete 2CD set of Dvořák's works for cello and piano, including the world premiere of the Cello Concerto No. 1 in A major with piano accompaniment; as well as a no less original CD entitled Reflections. Faithful to his unorthodox line, this time out he opted to couple Zoltán Kodály's well-known and sought-after solo sonata with another two works by the same composer, albeit ones that have been less frequently performed: a sonata with piano accompaniment, plus a smaller-scale sonatina. Moreover, as a counterpoint to this Kodály "bloc", he added a bonus in the form of a sonata by Vítězslav Novák, which received its premiere on this CD.
Bárta's creative share, boosted by his partner Jan Čech at the piano, is quite formidable and therefore highly recommended to your ears.
Jiří Bárta's fascinating accounts of sonatas by Zoltán Kodály and Vítězslav Novák.