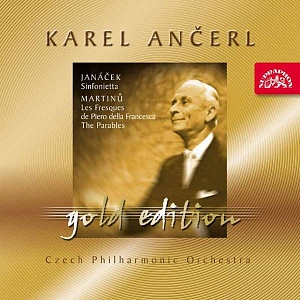 Deezer
Catalogue Number: SU 3684-2
Published: 23rd June 2003
Genre: Orchestral
Format: 1 CD
This album has received following awards:
The fourth half-dozen volumes of the Ančerl Gold series are characterized, apart from the representativeness that accompanies the series as a whole, a fine balance of style and programming. Namely, this batch includes three titles featuring Czech music, alongside another three albums of works from the international repertoire; plus, this instalment brings a tasteful blend of purely symphonicmusic, concert works, and sacred vocal production. Romantic souls will rejoice at the presentation here of a Dvořák title compiled, in one of Ančerl's artistically most eloquent creations, from a dazzling parade of compositions, including the popular Carnival overture with a palette of moods that pivots alternatively around Bacchus and Pan; and the Sixth Symphony, featuring one of Dvořák's most suggestive furiant dance numbers. A legendary comeback is being marked here by the reissue of Tchaikovsky's Piano Concerto in B flat minor with Svyatoslav Richter, seconded in no less grand style by the concert violin display of Bartók specialist André Gertler. A veritable musical feast is celebrated in Ančerl's reading of Shostakovich's "Leningrad" Symphony. The high emotionality and tragic drama of Shostakovich can hardly be more credible anywhere else than it is here, delivered by a conductor whose bitter wartime experience stayed with him throughout the restof his life. While the originality of the compositional idioms of Janáček and Martinů is clearly discernible after the first few bars of their music, the artistic legacy of Ladislav Vycpálek ranks alongside the most profound manifestations of philosophical spirit in Czech music, and is certain to come as a pleasant surprise for the discriminating music-lover in particular.

Richard Morrison: “I would happily live with Mackerras’ recording for the rest of my days with Raphael Kubeliks messier but magnificently characterful interpretation for variety. Yet neither is my first choice. For me, one conductor offers a vision of the Sinfonietta that is head and shoulders above everyone else in emotional power, dramatic pacing and sheer sonic splendour. And that is Karel Ancerl. So lets hear him and the Czech Philharmonic blasting the roof off with a final ear-splitting pages of this fabulous work.”
Andrew McGregor: “Such a grand finish with those Czech players raising the roof at the end of Janaceks Sinfonietta and the emotional power of that 1961 performance with the Czech philharmonic orchestra conducted by Karel Ancerl is still top of the heap for Richard Morrison. So Ancerl in Prague is his overall Building a Library recommendation. You’ll find it on the Supraphon label.”
BBC Radio 3 – Buliding a Library, July 2017