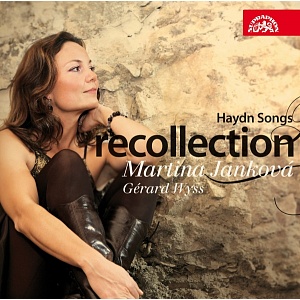 The charming young soprano Martina Janková has amid fierce international competition established a firm position within her category. Since 1998 she has been a soloist of the Zurich Opera, working with conductors of such renown as Gardiner, Harnoncourt, Fedoseyev, Herreweghe and Rattle. Under Gardiner, she has also participated in recordings of Bach's cantatas. Yet, as in the case ofthis album, she keeps returning to the song repertoire, which simply suits her voice perfectly. Her Haydn is unpretentious, yet she captures all the nuances of expression and colour amid the spectrum of moods of individual songs. The composer was very particular about the differentiation of the songs' character according to their content, either when composing to poetic texts or arranging folk songs. The song collector Thompson designated Haydn as the only one who was able to create "a collection of all wonderful, both sad and merry, folk songs, none of which canbe superficial or second-rate". Fittingly, Haydn inscribed the dedication to one of the collections: Mi vanto di questo lavoro. (I am proud of this work). Martina Janková too could confidently inscribe the same words above this recording.