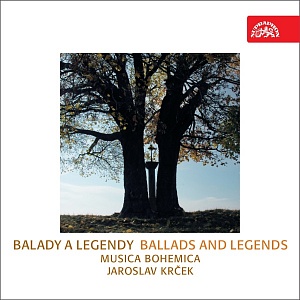 Musica Bohemica are celebrating their 40th anniversary, which is a fitting occasion to look back. The very first recording the ensemble made for Supraphon, the LP Dřevo se hudbou odívá (Wood Attired in Music), released back in 1979, features several forcible folk texts (Vandrovali hudci, Hořelo srdéčko, etc.), to which the artistic director, Jaroslav Krček, composed music with such sensitivity that many a listener still considers it folk tunes. The next Musica Bohemica album, České a moravské lidové balady (Czech and Moravian Folk Ballads), includes traditional melodies in Krček's arrangements, imbued with his singular signature and colourful instrumentation. Jaroslav Krček also proved to be sure-footed when selecting the soloists; one would be hard pressed indeed to imagine better delivery. The anniversary album features pieces selected from the two early recordings, with some of them being released on CD for the very first time. The songs that have enchanted generations of Musica Bohemica listeners now come across in their full beauty.

Musica Bohemica's anniversary commemorated with early recordings - a spell that does not wear off...