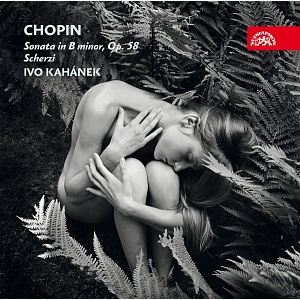 Chopin: Sonata in B minor, Scherzi

His previous solo album (Janáček, Martinů, Kabeláč; Supraphon SU 3945-2) earned the young pianist Ivo Kahánek, one of the most remarkable talents of his generation, numerous enthusiastic responses on the part of the critics ("A great recital!" - Classics Today - rating 10/10; "He is a very special talent" - Fanfare). With his new album, he has embraced the very coreof the Romantic piano repertoire and in so doing pays tribute to Fryderyk Chopin. In addition to the paramount Sonata in B minor, Chopin's most extensive work for solo piano, Kahánek performs Four Scherzi, composed throughout Chopin's creative life. Kahánek's infectious musicality brings out the compositions' poeticism, romantic upswing and virtuosity to the full - one often has the feeling that this is "merely" improvisation, a music originating from the sheer magic of the moment. The pianist's credo is seeking his own path, yet consistently within the intentions of the composer's score (according to Jan Ekier's new edition). Chopin pieces recorded on innumerable occasions ... yet somehow different, novel, inspired.

“All his performances have a natural grace and impetus. Nothing is over-stretched, exaggerated or rhetorical…He is hauntingly reflective in the Fourth Scherzo's central piu lento.“
Gramophone, February 2011

“Kahánek exploits Chopin's rhetoric to the full, never even shying away from acerbic cynicism. For me, it is the care that Kahánek devotes to the transitions in these pieces that makes them so unique. Offhand, I can't think of anyone who manages these passages between the fleet outer sections and their contrasting trios more skilfully, nor imbues them with greater affection.“
International Record Review, March 2011